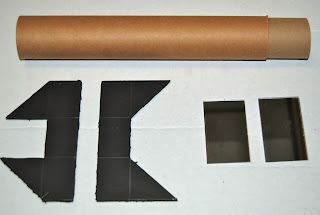 Materials:
• 2'' x 1-2' cardboard tube (we used a Uline.com kraft telescopic tube # s-1634, but any non-telescopic tube of about this size works fine)
• Black foam core (you can use other colors but we find matt black to be the least distracting when looking through the periscope)
• 2  2''x 3'' acrylic mirrors (we get ours pre-cut in 2'' strips by tap plastics)

Tools:
• Pencil
• Metal ruler (to measure and cut against, a carpenters square, drawing triangle or T-square can be helpful for making perpendicular lines)
•X-acto/ utility knife
• Hot glue gun
• A fine toothed wood saw (for cutting the acrylic mirror if it is not precut) 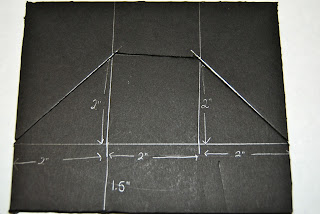 The first and only particularly involved step of of making a periscope is to draw and cut out the foamcore mirror holders.  The pattern above will make both the top and bottom mirror holders at once, as long as the vertical and horizontal line are perpendicular to each other.  The only important dimensions are the 2'' line segments. The horizontal segments correspond to the diameter of the tube and the vertical segments are identical to make 45 degree diagonals for the mirrors.  If you were to use a 1.5'' tube or a 3'' tube all the 2'' measurements would be 1.5'' or 3'' respectively. The 1.5'' dimension would be unchanged as it just  extra area to glue the mirror holder to the cardboard tube. 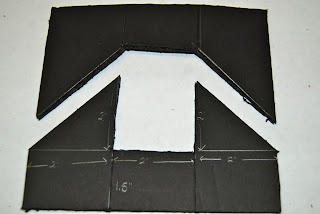 Once you have your lines drawn cut the two mirror holders apart, and score the vertical lines so the they can fold like so. 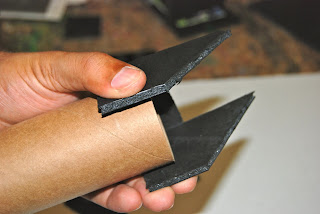 Put a generous amount of hot glue on the bottom of the mirror holder and hold it on the end of your tube until the glue sets.  If you have a telescopic cardboard tube just repeat this on other side.  If you have a single tube you'll need to think about where you want you periscope to look.  If both mirror holders are glued in the same orientation the periscope will look behind you. If one is forward and one backward you can look forward. The telescopic tube gets around this problem by pivoting, so you can look in any direction. 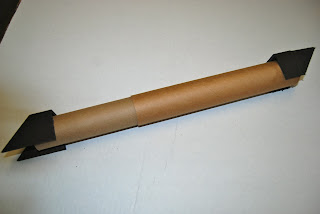 Here's the finished tube and mirror holders.  If this were a non-telescopic periscope it would be forward looking in this orientation. 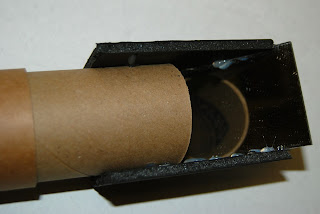 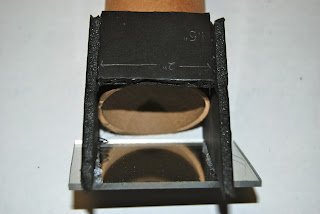 
Things to Do and Notice:

Periscopes were invented to look above or around obstructions, or to look at something from a concealed position, as in the classic case of the submarine periscope.  While we encourage the use of periscopes for these purposes, it should be noted that periscopes are a useful way to explore mirrors and reflection.
In a periscope the mirrors are angled at 45 degrees. The upper mirror collects light form outside the tube and sends it down the tube, the lower mirror catches the light and sends it out to your eye.  Apart from being able to change the direction of a beam of light, mirrors have the interesting quality of inverting what they reflect. 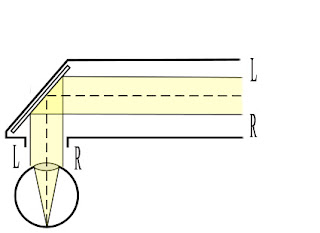 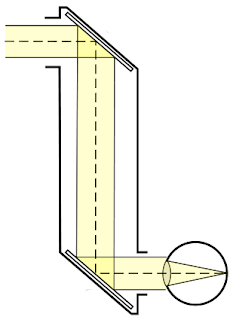