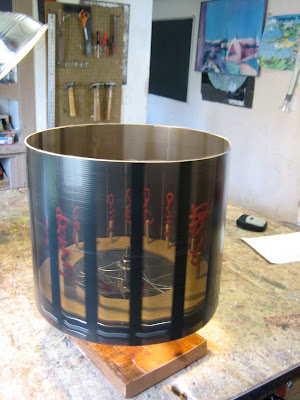 In the quest to make a larger display version of our mini zoetropes, we used a 16'' bike wheel for the base and a scaled up tape method for making the slots.  We were lucky enough to get a large roll of 14'' x .6mm PETG plastic (vacuum forming stock) for the drum and used black duct tape to block the spaces between the slots. Companies like McMaster-Carr, or Tap Plastics or even you local art store may carry similar material. The key is to find a material that can hold the tape without sagging and is not prone to creasing or tearing.  In order to get the slots even we cut off a sheet of plastic slightly longer than the circumference of the wheel and then used 1/4'' masking tape to evenly mark off the positions of the slots.  We then covered the gaps between the masking tape with black duct tape on both sides and finally removed the masking tape to create the slots. 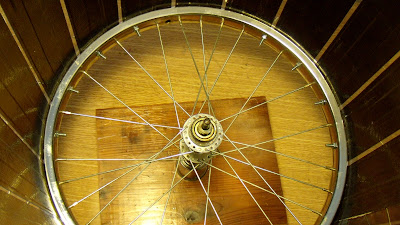 We attached the slotted drum to the bike wheel by removing some of the spokes in a symmetrical manner around the wheel and replacing them with bolts. In the case of our wheel (36 spokes) this meant removing every other spoke for four spokes and then leaving a block of five spokes in tact. We then used a sharpie and hole punch to mark and cut out corresponding holes in the plastic sheet of the drum allowing them to be fastened together.  When all the bolts were in we taped up the seam on the outside of the drum. 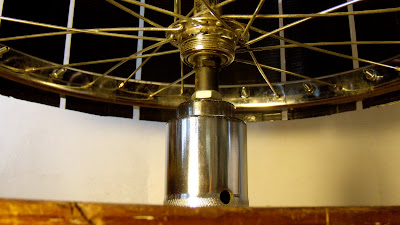 We used a bike peg to mount the wheel in a hole to the zoetrope's wooden base.  Though the fit was not exact we were able to get a snug fit using some more duct tape and a long set screw coming in from the side of the wooden base. 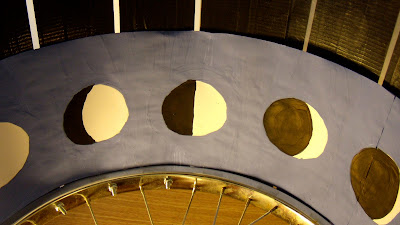 We found that a good animation can be created using about 12 frames on a 6'' paper strip and the contrast of the images can be dramatically increased by lighting the inside of the zoetrope so it is brighter than the ambient light in the room. 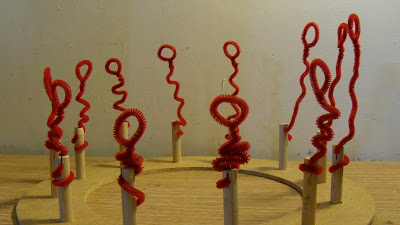 As not all kids feel confident drawing, let alone making a series of drawings, we made several sets of these inserts designed to hold 12 frames of wire sculpture.  Working in three dimensions is often more approachable and intuitive way to create animations, and the fact that it works is often a pleasant surprise to people who have not tried it previously.

Here's a brief clip of what a paper strip animation looks like through the zoetrope.
Designed by Antonio Papania-Davis 2010
Posted by Discovery Center at 10:50 AM 1 comment: