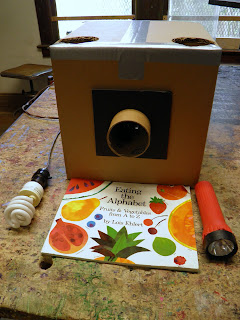 Opaque projectors are the ancestor of the more modern overhead projector and essentially a camera obscura used backwards. The basic idea is instead of having a dark chamber where an image from outside can be projected, have a very bright chamber in a dimly lit room so the light reflected off of whatever is under the projector can be directed through a mirror and lens to be projected into the room.
As opaque projectors use reflected light off a piece of paper verses light transmitted through a film as in overhead projectors they are inherently less efficient at the paper absorbs some of the light. They are however optically simpler and able to project the image of any flat surface they are set on.  So you can draw something or just pick it up place it under the projector and it will work, no transparencies necessary. We've come up with this bare bones cardboard box model so you can experiment with what is now a somewhat rare and fairly specialized piece of equipment. 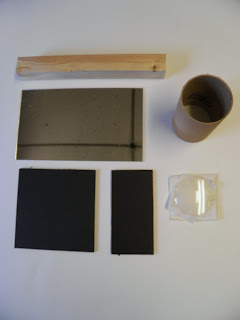 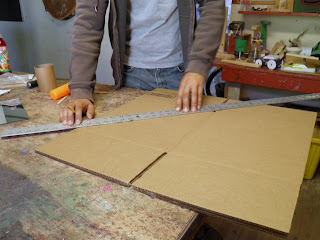 Start by marking the center of one side of the box by making an x from the corners. 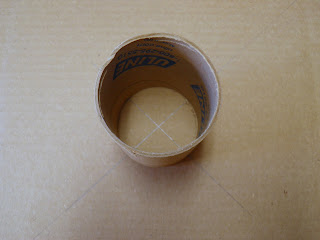 Center your 3'' cardboard tube over the x and trace it to mark the location where the lens barrel will be mounted. 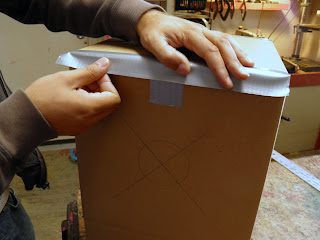 Fold up the box and tape the seams with duct or gaffers tape, to prevent light leaks. 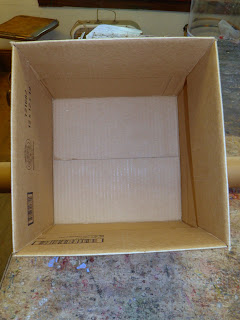 Hot glue the top flaps together from the inside and then fold the bottom flaps inside the box and hot glue them in place to reenforce the box. 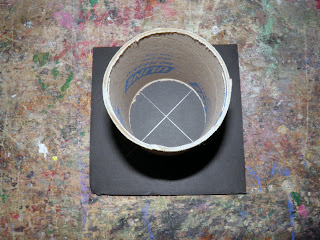 Cut a 5''x5'' square of foam core, center and trace a 3'' lens barrel tube. This collar will reenforce the lens barrel hole in order to hold the barrel straight. 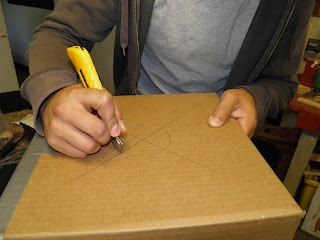 Cut out the lens barrel hole with a utility knife. 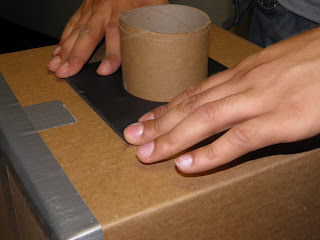 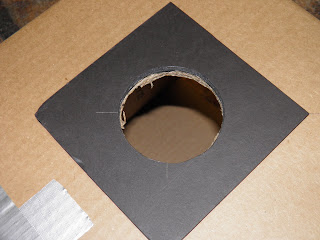 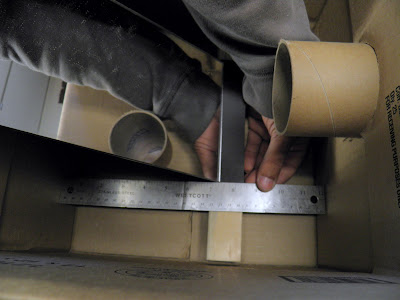 The next step mounting the mirror can be a little complicated. The best case scenario is that you have a 6''x17'' plex mirror and you can just place it from the front top edge to the bottom back edge.  This is more mirror than you need but it will be the required 45 degree angle. If you have a small mirror like we did (6x10'') you can use a 6x17'' piece of foam core or stiff cardboard to put where the large mirror was and glue your small mirror in the middle. Alternately you could do what we did which was to lower the top of a small mirror (6x10.25'') about 1.75'' using a piece of 2x2'' and some foam core in order to center a small mirror behind the lens barrel.  This method gets the mirror into the optimal position, but this requires some measuring to get angle right. Our mirror rested about  7.5'' on the from the rear wall,  9.25'' up rear wall: 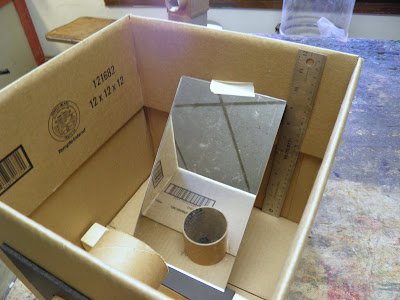 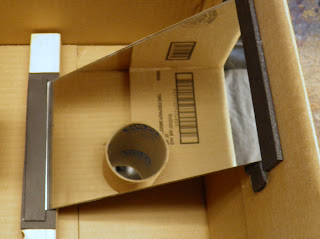 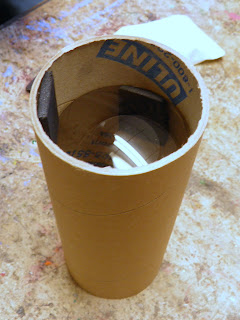 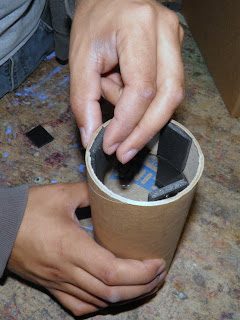 After the lower lens holders are secured, place the lens on top and then glue three more spacers over it to pin the lens in place. 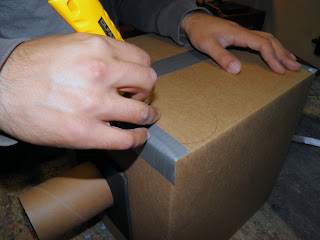 We cut 2 light ports in the upper front corners using the lens barrel as a template.  As the light ports are on the same side of the lens barrel, no light will be able to make it directly into the lens from the light sources placed in the ports so they will not interfere with the image. 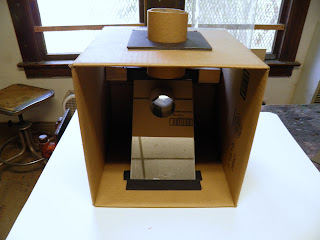 Here's the camera with the lens barrel inserted looking from the bottom.  Note that the lens is mounted on inside of the box (close to the mirror), not on the outside as in the tracing camera.

Here is the projector, a book and two light sources we tested. 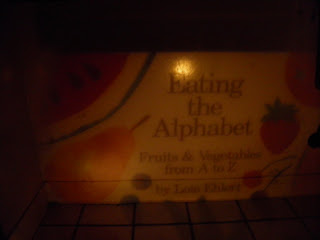 Here's the image the image the projector produces using a 20w warm white compact florescent held in the light port. Optimally using two 23 watt cool white compact florescents would produce the brightest image. Using a clip light socket with a foamcore or cardboard ring around the socket you can hang the lights in the projector box.  Painting the inside of the box white next to the light sources or covering the walls with aluminum foil might improve brightness as it would the lower the amount of light the inside of the box would absorb. Note that using incandescent is not recommended given they run hot and might pose a fire hazard. 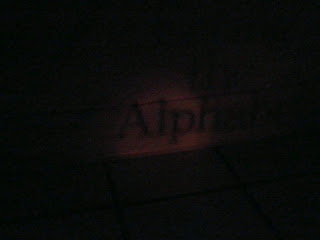 Here is the far dimmer image the projector produced using a cheap flashlight.  Using 2 higher powered flashlights you could expect to get a more usable image, but it would still be weaker and smaller than the compact florescents.

Popular posts from this blog

November 20, 2012
Perhaps you've seen hot air balloons for sale as science demonstrations/experiments that you fill up with hot air from a hair dryer and let float to the top of the room.  This product can be easily recreated on a smaller scale with tissue paper.  This project is a great way to demonstrate and learn about gases and density. You'll need: 5-6 sheets of tissue paper, a strip of paper, a glue stick, a marker, scissors, and  a hair dryer. The first step is to layer 5-6 sheets of tissue paper and fold them in half lengthwise. Use a marker to draw a half tear drop shape. Cut along the line and unfold the layers.  Each one will be a panel for the hot air balloon. Using a glue stick, or wet glue thinly applied with a paintbrush, glue one edge (marked in the picture above) and layer another panel on top. Pres down firmly to seal the edge. Once the glue has dried, unfold the two panels to inspect for any holes.  Make sure to seal up any gaps.
12 comments
Read more

July 15, 2012
Materials: • Wide clean plastic cup or clear solo cup. • A straw • Skewers • Bottle caps • Foam core • Tape Tools: • Scissors • Hot glue gun • A wood screw • Phillips screw driver or pencil Automata meaning self operating machine typically consisted of a clockwork statue or scene and were first created centuries ago in Europe and Asia.  They were in many ways the direct ancestor of what became electro mechanical robots.  For our purposes automata are a good way to explore machine's function of converting one form of energy and motion into another.  They are also a way to teach simple mechanical problem solving skills. Micro automata were the first in our series of attempts to simplify cardboard automata. The basic idea was to avoid building the box by putting the mechanism inside a clear plastic container.  Mechanically they are very simple. They have a input shaft with a crank coming out the side and an output shaft coming out the top with a mechanism in th
2 comments
Read more

Oakland Discovery Center
Oakland, CA, United States
The Oakland Discovery Centers located in Central East offer free access to material and resources for youth in a supportive art and science workshop setting. The center strive to provide a creative and safe environment, which stimulates curiosity and encourages making as a way of learning.