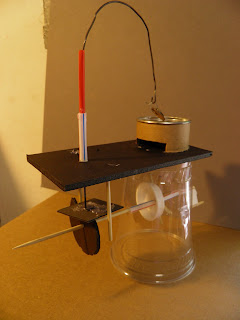 Sound automata is a modified automata mechanism designed to make a series of sounds instead of animate a scene or character. We've separated the material needed for the mechanism for the automata and the noise makers in order to make things clearer. While this a good starting place there is really no limitation on what material you can use especially on the sound making side. 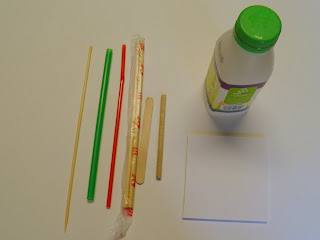 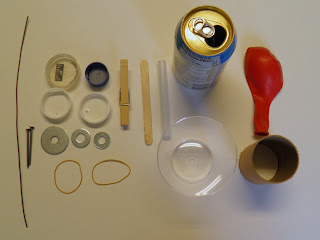 Materials for making sound:
• Annealed steel wire
• Rubber bands, clothes pins (these make good springs if you need something to snap back)
• Cups, cans and cardboard tubes (can be simply hit or have something stretched over them to make a drum, alternatively they can be cut into smaller pieces).
• Bottle caps
• Washers
• Nails
• Hot glue sticks 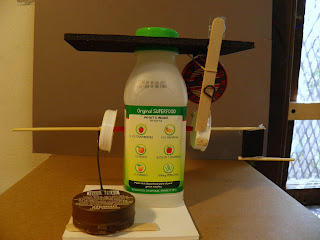 The base for our sound automata is the bottle (or cup) and diving board structure used in the our large automata, a foamcore base can be added if needed. The main difference is that that we've used both sides of the crank, and in some models (see the drop hammer) multiple items on one side. 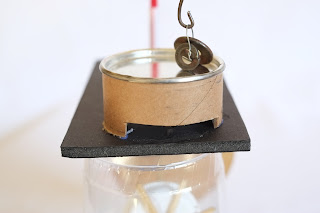 Here is a simple example of a noise maker.  We have a short length of cardboard tube with a steel end cap, it's been glued to the diving board and slots have been cut in the bottom so as not to muffle the sound.  Several washers on a cam driven wire arm are raised and dropped to make a vaguely cymbal like sound. Different combinations of strikers, objects to be hit can make a wide variety of different sounds

In this case a piece of plastic cup has been glued into the inside of the automata cup so it hits a wheel with multiple skewers attached which pluck the plastic when turned.


A Drop Cam, sometimes called Snail Cams because of its shape, results in a slow lifting motion and quick drop which is good for striking something.  Because of the steep drop Drop Cams can only be turned in one direction.  Eccentric Cams, a wheel with an off centered hub, like the ones we generally use for automata lift and drop at the same rate and can be turned in both directions.

This is a very simple way to hit something below the crank. It is just a bottle cap with a piece of wire stuck through it off center with a loop on the back so it can move freely. When the crank is turned the wire ends up laying on the skewer until it is vertical at which point it falls faster than the turning bottle cap striking what's below. After it strikes it drags along the surface until it ends up laying on the skewer again.

This mechanism is somewhat unrelated to the others, based on a  vertical shaft connect to a weighted friction gear with a pivoting wire hammer spinning on top.

We're still trying to figure this one out, the general idea is to use some sort of a cam or crank to move something back and forth to scrap or brush a surface.


Posted by Discovery Center at 2:07 PM